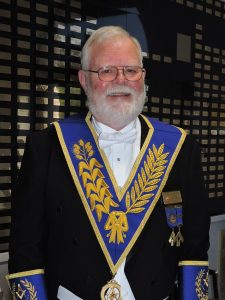 R.W. Bro. Scott Ryckman was born in Toronto in 1953. In 1986, having worked as a Technical Sales Rep for several companies, he co-founded Vibtech Analysis Ltd, a mechanical consulting company specializing in vibration analysis. He became a Private Pilot in 1980 and was a very active member of Noganosh Hunt Club for over 30 years.

Scott was also extremely active with St. John Ambulance Therapy Dogs for over 15 years. In 2012 he was honoured for his charitable work by being made a Member of The Most Venerable Order of the Hospital of St. John of Jerusalem (one of the 6 National Orders of Canada).

He was married to his wife Wendy in 1987 and they are proud of their blended family. They moved from North York to Aurora in 1993 and have put down deep roots into the community. Both Wendy and Scott enjoy their Golden Retriever Tasha, ballroom dancing, golfing and travelling.

In his new role as District Deputy Grand Master of York District, R.W. Bro. Ryckman looks forward to this new chapter in his Masonic experience. He is a “hands-on” individual and will work with district committees and individual lodges to strengthen York District. Harmony of the district, vitality of individual lodges, involvement in district events, and greater community awareness will be cornerstones of his year.