Meeting on 1st Wednesday of the Month (except July and August) at 7:30 PM

at the Newmarket Masonic Hall

Corinthian Lodge No. 481 G.R.C. celebrated its 100th Anniversary in 2007, having been inaugurated on 10 January 1907. The details are not clear, but it seems that the lodge came about as a result of some sort of disagreement in the early months of 1906 among the members of Stevenson Lodge. Apparently the issue was a policy matter, not a personality clash, and discussions on the problem seem to have been cordial. Ultimately a group of Brethren from Stevenson Lodge requested the creation of a new Lodge.

The Temple at 801 Yonge Street was the home of Corinthian Lodge for 15 years. During 1907, the first year of service, initiations and affiliations raised the membership to 79. Membership increased over the years, reaching an all-time high of 336 members in 1950. Unfortunately, Stevenson Lodge eventually went dark. In 1970, Corinthian Lodge No. 481 moved to the Richmond Hill Temple at 112 Crosby Street in Richmond Hill. In 1983 the Lodge was moved again to its current address of 411 Millard Avenue, Newmarket.

History of The Newmarket Lodge 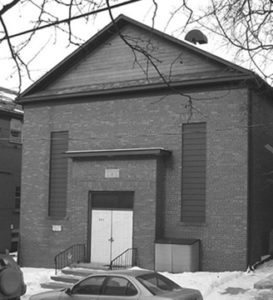 Tuscan Lodge was Instituted March 19th 1858, but it is uncertain where the first meetings of the Lodge were held. There is some contention that they were held in a room over a carriageworks operated by a Mr. Hutchcroft near the southwest corner of Queen and Main Streets in Newmarket. Others claim they were held in the home of Dr. S.H. Peck on Main Street. There appears to be no way to substantiate either possibility.

Early in 1860 meetings were held in the Village Hall, sometimes known as the Mechanic’s Hall on Timothy Street. Some years after that the lodge was moved to the third floor of the Widdifield Block at the corner of Main & Botsford Streets. That building was later purchased by the Town of Newmarket. 1896 saw the Lodge moved to the top floor of the Era Building on Main Street. Increased membership and a need for larger premises meant another move in 1921, this time to the Wesley Block over Whimster’s store. In 1957 the building at their present location formerly known as the Temperance Hall, was purchased and readied for the celebration of their Centennial in 1958. Dedication ceremonies were held on December 5th,1958 with 28 Grand Lodge officers in attendance, headed by Grand Master M.W.Bro. Harry L. Martyn. A total of some 300 members and visiting Masons attended the ceremony.

Tuscan Lodge meets at the Newmarket Hall on the second Thursday of the month, and celebrated its 150th anniversary in 2008. Corinthian Lodge #481 also meets here, on the first Wednesday of the Month. To visit the Newmarket Masonic Hall drive from the intersection of Yonge and Highway #9 ( Davis St.) proceed east on Davis to Main, then south on Main to Millard. The latter is one-way westbound.