at the Vaughan Masonic Hall

A group of Masons, led by Brother James Wood, a blacksmith and a member of an Irish Lodge, applied to the Grand Lodge of Ireland for a Warrant to establish a Lodge in Nobleville (later to be known as Maple). In July 1854, a warrant was received from Dublin, at a cost of 7 pounds, stating that “Vaughan” Masonic Lodge be located at Nobleville, Upper Canada and numbered No. 236 I.R.

Vaughan ’s meetings were held either at Noble’s Hotel or the “Temple Room” at McArtney’s Hotel. In 1866, Bro. J.M. Rupert donated some land on the fourth Concession, now Keele St. where a two story building was opened December 18, 1866. This building was home to Vaughan Lodge for 123 years but increasing costs led to its sale in 1989. For the next seven years the Lodge used the meeting hall of Robertson Lodge in King City. In 1996 Vaughan Lodge purchased 2142 Major Mackenzie Drive.

The history of Mizpah Lodge No. 572 began with a meeting in Freemason’s Hall, on College Street, Toronto in February 1920, for the purpose of forming a new Masonic Lodge. After completing the appropriate procedures, the Lodge was Instituted on Tuesday, June 29th, 1920.

The name “Mizpah” was chosen to signify a place of meeting. Biblical records quote Labon’s reply to Jacob. “Let us make a covenant at this place. May the Lord watch between Me and Thee when we are absent one from another”.

Mizpah Lodge met in the Masonic Temple at 491 College Street, Toronto. There were 14 meetings held in 1920 with 55 Brethren Initiated, Passed and Raised. In 1964 Mizpah lodge moved to Davenport Temple.    Over the years many activites took place at Mizpah Lodge. One of the more unusual was the hosting of the “Virginia Craftsmen”- a group of Masons who travelled to perform the Master Masons Degree. They dressed in Confederate uniform, in memory of the Civil War of 1864-1867.

Woodbridge Masonic Temple became the next meeting place. They moved to Vaughan Masonic Hall in 2000 due to the closing of the Woodbridge Temple because of a potential health hazard. 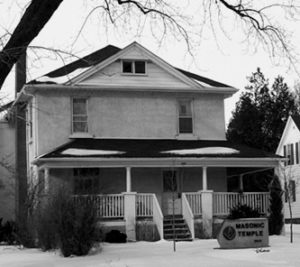 Vaughan Masonic Hall at 2142 Major Mackenzie Road in the City of Vaughan was opened and dedicated on September 24, 1996 having been purchased several months earlier, then remodeled and enlarged by Vaughan Lodge No. 54 G.R.C. 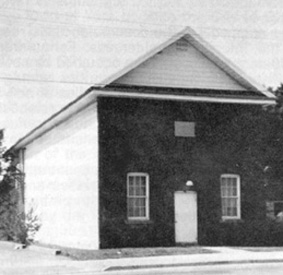 The original Vaughan Masonic Temple was this two story structure built in 1866 on Keele Street, north of Major Mackenzie Road in the Township of Vaughan. It was constructed on farmland donated to Vaughan Lodge No. 54 by Brother J. M. Rupert. The records indicate that the lodge was built with the donated time and effort of the members, and $635.84 in cash, paid mostly to purchase construction materials.

In 1922 the building was enlarged and re-decorated. Again in the period from 1949 to 1954 it was enlarged, renovated and redecorated in anticipation of the Vaughan Lodge centennial celebrations of 1954. The building remained as the home of Vaughan Lodge No. 54 until 1989.