at the Richardson Masonic Hall

In the late 1850’s interested Masons in Stouffville set out to form a lodge in the area. Accordingly an application was made to the Grand Lodge of Canada West. The Lodge was Instituted on the 15th of June 1860, Chartered in 1861, and was named after Right Worshipful Brother Francis Richardson, a Past Grand Senior Warden and Grand Secretary of the Grand Lodge of Canada West.

Francis Richardson was born in 1814, in Plymouth, England. He was initiated, passed and raised in Lodge #424 in Plymouth, receiving his Master Mason degree in March 1842. Later that same year, he sailed to Canada (a voyage of 45 days), landing at Quebec, then journeyed to Toronto. He is listed as a chemist when, in late 1842, he affiliated with St. Andrew’s Lodge, at that time numbered Lodge #1, and now known as St. Andrew’s Lodge #16. He was elected Worshipful Master of St. Andrew’s in 1845 and again in 1846.

Relations with the Grand Lodge of England were tenuous and strained by non-responsiveness and the demand for funds. There were many heated “debates” about whether Canada should form its own independent Grand Lodge. It was V. Wor. Bro. Richardson’s intelligent, articulate, and balanced written communications which summarized these conflicting deliberations. He pleaded our case persuasively and controlled local outrage at being ignored or rebuffed. This was likely his greatest contribution to the Craft.

In July 1858, Richardson was elected Grand Registrar of the (now united) Grand Lodge of Canada and that same year the new Grand Lodge created several new districts including Toronto District which housed 22 lodges. The District stretched from Lake Ontario to Georgian Bay. In 1859, he received and forwarded a petition from W. Bro. James Bowman of Sharon Lodge to form a new Lodge at Cashel (above a livery stable at an inn at the corner of Kennedy road and 18th Avenue). This new lodge was to be named the Richardson Lodge after himself. It is to be wondered what he thought when he received that petition. The petition was granted, and the Lodge first met on July 15, 1860. Richardson Lodge early minutes were burned in a fire in 1876 so it is not known for certain if he attended the Consecration Ceremony in 1861. However, he was elected D.D.G.M. of Toronto District again in 1860, so it would be very unusual if he wasn’t there.

It is an interesting footnote to add that he was also active in the appended bodies of Masonry. He was a prominent member of St. Andrew’s and Ionic Chapters. In April 1853, he was conducted through the ceremony of being knighted in Hugh de Payens Encampment of Knights Templar at Kingston, by the (Rt.Hon. Sir) John A. MacDonald, then a practicing lawyer.

This extract is from material prepared by
R.W.Bro. Murray Wagg and
R.W.Bro. Bill Sanders 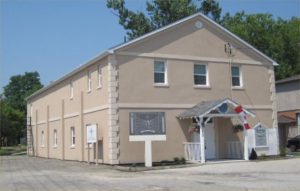 northeast corner of what is now 18th Avenue and Kennedy Road. It was above the livery stable and barn of an Inn.

Travel was often difficult and initiations were few in the early years at Cashel, so in 1866 the Lodge was moved to Knill’s Hall in Stouffville. This building was opposite what was then the town’s post office. Meetings were held there for the next ten years, until a fire razed that structure.

Daley’s Hall was the next home of Richardson Lodge. It was on Main Street in Stouffville opposite the clock tower. The Lodge remained there until April 1955.

On that date Richardson Masonic Lodge #136 opened it’s own Masonic Hall. It was a proud occasion for those who had worked so hard to see their building now completed and opened.