at the Richmond Hill Masonic Hall

“A History of Richmond Lodge”, published in 1974 to commemorate the 150th anniversary of the lodge, states;- “Richmond Lodge had a beginning which is vague, a history which is interesting.” The exact date of the Lodge’s formation is simply not known, in spite of considerable study and much research. “As with many of the early Lodges, records of proceedings are either rare or non-existent”.

The first known reference to Richmond Lodge is in a letter of the Grand Secretary of the Second Provincial Grand Lodge, dated September 20th, 1825. It states that Richmond Lodge was among six Lodges for which no Warrants had been obtained, that had joined the 2nd Provincial Grand Lodge since its formation in 1822. The authors of the 1974 history reviewed a number of documents in their efforts to determine the date of the origin of the lodge. Perhaps the most compelling evidence comes from one edition of the venerable newspaper “The Liberal” at the turn of the century. In that report they quote a local historian whose memory carried him back to the 1840’s.

“Another old building was built in 1823 by Rowland Burr. The upper room of this building was the First Masonic Hall in our town and the birthplace of Richmond Lodge #23. The old house was pulled down to make way for the White Hart Hotel which fell prey to the flames, and cleared the site for the Grand Central.”

After the loss of their first home, Lodge meetings were held in a variety of sites, usually at hotels in the community. While these locations were adequate, there was a continuing desire by the membership to possess their own premises for a meeting place. In 1870 a lodge building was built and dedicated on Yonge Street in Richmond Hill. The photo above is from the 1974 publication “History of Richmond Lodge” and shows the interior of the Yonge Street Masonic Temple. This building served the Lodge until March 1958 when it was sold in anticipation of the completion of a new building. The first meeting in that new Masonic Hall at 112 Crosby Ave. at the corner of Pugsley Avenue was held on May 20th 1959. The stone from the front of the Yonge Street building was preserved and installed in the wall just inside the front door of the Crosby Avenue Masonic Hall.

Located at 112 Crosby Street, the Richmond Hill Masonic Hall was built by Richmond Lodge #23 G.R.C. in 1959 and is a large building, with a spacious sanctuary on the main floor, and a comfortable dining room on the lower floor. The ante-room outside the door of the Lodge Sanctuary is not just your ordinary assembly area, placed there to accommodate the Tyler and the Masons who are waiting to enter the meeting room. It is a veritable warehouse of memorabilia, documents, photographs and other Masonic Treasures. 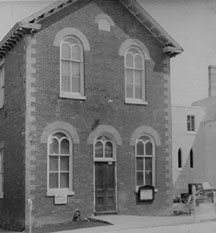 . The wood-burning stove that was used to heat that building is also on display, painted up and polished, and just as pristine as it was on the day it was installed in the old building. The Lodge Banner, a little faded after all these years but carefully preserved in a large glassed frame, graces the west wall of the room. In the corner, next to that banner and high up on the south wall, is a picture of the man believed to have been the first Worshipful Master of the Lodge, V. W. Bro. Col.David Bridgeford. He is there, looking down on all the Masons who have come to visit his Lodge over the years.

Early records of the Lodge are incomplete, but V. W. Bro. Bridgeford is thought to have been Lodge Master on 12 occassions between the years 1824 and 1861. The photos shown here are just two of the many pictures and exceptional objects to be found in this remarkable storehouse.Anyone planning to visit this Masonic building should set aside a few moments to see these historic and carefully prepared displays.