Meeting on 1st Thursday of the Month(except July, & August) at 7:30 PM

at the Aurora Masonic Hall

The Rising Sun Lodge was Instituted in 1860 and the first Master of the Lodge was W.Bro. Robert Lyon. The first Lodge meeting was held that same year in a room over Lundy’s Wagon Shop on Yonge Street in Aurora. That building was destroyed by fire in 1865 and although the Warrant was saved, all other charter records and regalia were lost.

The lodge was then moved to a room over the Fitzgerald Stove Factory on Wellington Street East. Later the brethren bought the northern half of this property and erected a Masonic Hall which was used until 1885.

In that year an event that affected a nearby church had a profound effect on The Rising Sun Lodge. The Episcopal Methodist Church, which was located at 57 Mosley Street in Aurora, became part of the amalgamation of all Methodist bodies. As a result, their church building was no longer needed, was closed, and became available for purchase. It was bought by the Lodge and converted to use as the Masonic Hall. The Rising Sun Lodge has occupied this building since that time.

Brother Wilfred Adams, who wrote the centennial history of the Lodge, states -“From the many minutes dealing with the mortgage payments, it appears that this company was one of our most persistent correspondents. Things became so desperate that in 1891 a committee was appointed to wait on the High School Board (which holds a property next to the Lodge building) and try to dispose of the hall.” The problem was finally solved in a very enterprising way. “In 1900 a Mortgage Fund was organized by the Lodge which offered shares to the lodge members at $5.00 dollars per share. There was such a generous response that the mortgage was discharged in 1905, and in turn, the last of the shareholders were paid off from Lodge funds in 1911.”

A truly notable property and heritage building had been saved.

History of The Aurora Masonic Lodge

The Aurora Masonic Hall is located at 57 Mosley Street in that community and is the home of The Rising Sun Lodge #129, 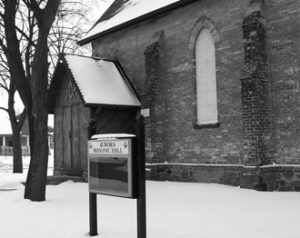 Delta Lodge #634, and Robertson Lodge #292. It was originally constructed in 1877 as a Methodist Episcopal Church and was purchased in 1885 by The Rising Sun Lodge, which has continued to own and occupy the premises since that time. The walls of the Lodge Sanctuary are graced by four magnificent paintings installed in the early 1900’s to illustrate the Four Proper Objects of a Mason’s daily life – Prayer, Labour, Refreshment, and Sleep. 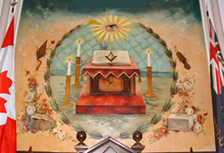 In central Aurora, the Masonic Hall can be located by proceeding one block south on Yonge Street from the intersection of Wellington Street, then turning east on Mosley Street. Regular meetings of The Rising Sun Lodge are held on the first Thursday of every month at 7.30 p.m. Delta Lodge meets on the second Tuesday of every month at 7.30 p.m. and Robertson Lodge is a daylight lodge, meeting on the third Saturday of each month at 10.00 AM. This year (2010) Robertson Lodge will be holding emergent meetings on the third Saturdays of July & August. Visiting Masons are invited to attend.