at the Newmarket Masonic Hall

From such records as are available, it appears that the Western Light Lodge, originally numbered No. 7 and then later renumbered as No. 13, was the first Masonic Lodge organized north of Toronto. This took place in 1817 and the first meeting was held in the home of Nathaliel Gamble in Concession #1 of King Township. This location was known as Gamble Bush and also Gamble’s Inn, just west of Yonge Street on what is now Mulock Drive. Eventually severed from King Township this land is now part of Newmarket. It also appears that Tuscan Lodge later met in the Penfold Tavern at Penfold Corners, and later still in LLoydtown.

Early in 1858 a number of members of Western Light Lodge in Newmarket and vicinity petitioned the Ancient Grand Lodge of Canada for authority to initiate a lodge in that community. Their cash book shows a payment of $6.00 on 23 February, 1858 for the Charter. A Warrant was granted on 19 March, 1858 as Tuscan Lodge No. 99.

In July of 1858 the Ancient Grand Lodge of Canada affiliated with the Grand Lodge of Ancient Free and Accepted Masons. In October the Lodge was renumbered as Tuscan Lodge No. 99. While Tuscan lodge continued to function over the years in various locations in Newmarket, the Masonic District around it seems to have shifted about considerably. Tuscan was originally in District “11A”, was then transferred to Toronto Centre District “11B”, which became Toronto District “C”. Next it was part of Toronto District 5, and in 2006 became part of Toronto York District.  Toronto York is now York District. The first Lodge Master of Tuscan Lodge was V.W.Bro. Alfred Boltby. The oldest copy of the Tuscan Lodge By-Laws is dated 1894. It shows the Initiation fee set at $25.00 and dues for local members were $3.50 per year. 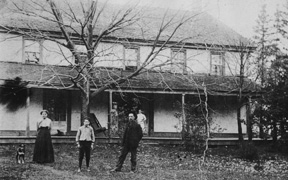 Whether the first lodge meeting was held in the home of Nathaniel Gamble or at his Inn (or whether they were one and the same place) is not known. Shown here is a photo of Gamble’s Inn. Likely the people in the picture are Nathaniel Gamble & family. When this site was visited in 2008 Gamble’s Bush was still there, but no visible remains of old buildings could be found.