at the Bolton Masonic Hall

True Blue Lodge has the unique distinction of having had two Warrants of Constitution in effect in the same year that the Lodge was being formed. It seems that the Charter Members of True Blue Lodge were all former members of Western Light Lodge No. 7, P.R. At this time True Blue was numbered 62. When the first meeting of the lodge was held on the evening of March 5th 1858, it was done under the authority of a dispensation issued by the Ancient Grand Lodge of Canada.

In 1943 D.D.G.M. Rt.Wor.Bro. Howard E. Richmond presented the lodge with the magnificent double-sided silk banner inscribed “Western Light Lodge No. 7, P.R.” which had been kept in the archives of Grand Lodge. It now has an honoured place in the “East” in True Blue Lodge.

True Blue Lodge celebrated its 150th anniversary in 2008. Part of the preparations for this celebration  included restoration treatment for the banner, which at that considerable age was starting to crumble. The banner now appears as bright and new as it did in 1858.

The Bolton Masonic Hall is the home of True Blue Lodge G.R.C. #98 which was initiated in 858 A.D. The first home for this lodge was one of the upper rooms of the Masonic Arms Hotel in that community, which hotel stood at the south-east corner of the intersection of King Road and Queen Street (Highway #50). It was used by the lodge for 16 years, until the property was sold by the hotel proprietor.

Constructed by members of the Lodge, the hall was built in the years 1872 to 1876. Originally a frame building, it has since been 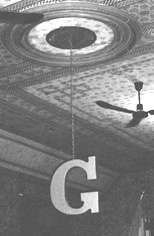 bricked to give it a more modern appearance. While the exterior is modern, when you step through the front door, it is like stepping back in time.The original nineteenth century furniture is still in use. While there are a few hard-backed wooden chairs in the “East”, most of the seating is upholstered benches, complete with the original fabric. A most magnificent ceremonial Letter “G” hangs from the centre of the sanctuary. The walls are finished in the original wallpaper, and since there is no daylight in a Masonic lodge, that wallpaper is as fresh and the colours are as bright, as they were 130 years ago. The walls also feature the original banner of the Lodge presented to them when they were granted a Warrant by The Ancient Grand Lodge of Canada, and were known as “Western Light Lodge #7 P.R.”

Lodge meetings are held in the evening on the 1st Friday of the month. To reach the Bolton Masonic Hall proceed west on King Road one block from its intersection with Highway #50. Turn south on Nancy Street.