at the Schomberg Masonic Hall

Union Lodge No. 118 G.R.C. is one of Canada’s oldest Lodges under the jurisdiction of the Grand Lodge of Canada in the Province of Ontario, but there is some confusion about the history of the Masonic movement when Upper Canada was being settled.

The 1820’s and 1830’s were times of great turmoil, culminating in the “MacKenzie Rebellion” of 1837 in Lloydtown. Some Lodges were being moved from one community to another, some Lodges were closed. Western Light Lodge No. 7 was active in Lloydtown, but in 1857 that Lodge was erased from the Masonic Roll and the Warrant returned to London England. It was placed in the archives of the United Grand Lodge of Masons.

When Union Lodge No. 118 G.R.C. was inaugurated in 1859 in Lloydtown, it is reported that the Charter Members came mostly from former Western Light Lodge No. 7. They were Bros. Thomas Swinerton, John Anderson, John T. Raper, Andrew Sloan, Henry McCabe, James Hunter, V.W.Bro. Solomon and H. W. Stogdill. There were two additional Charter Members, Bro. John Robinson of Delta Lodge No. 291 of Scotland, and Bro. D. J. Fountain of True Blue No. 98. Brother Swinerton, who had been a Past Master of Western Light Lodge No. 7, became the first Lodge Master of Union Lodge. On April 30, 1860 the Union Lodge received its Charter.

Union Lodge moved to Schomberg in 1870. Like many other organizations, the Lodge witnessed periods of activity over the years, as well as periods of diminished activity. From 1896 to 1900, it had only one Initiation. By 1903 the membership had drifted down to a low-tide mark of 17 members. In contrast, by 1985, at its 125th anniversary, the Lodge had a membership of about 125 members.

Union Lodge has noted some outstanding records of achievement and service. In Masonic service, four members of Union Lodge have risen through the ranks to serve as D.D.G.M. They were R.W.Bro. H.H. Sawdon in 1934 in what was then District “D”, R.W.Bro. Harold Russell in 1961, R.W.Bro. John G. Agnew in 1978, and R.W.Bro. W. Thomas Cober in 1994. The three latter officers served in Toronto District No. 7. In other activities, the Lodge has become involved in the national blood donor program. In the period from 2002 to 2006 the District No. 7 Blood Donor Committee was chaired for two years by W.Bro. William Boyle of Union Lodge. In the 2005/2006 season that committee collected some 1600 units of blood for the program.

Union Lodge meets on the second Monday of the month, except in July and August. The October meeting is held on the Tuesday after Thanksgiving. 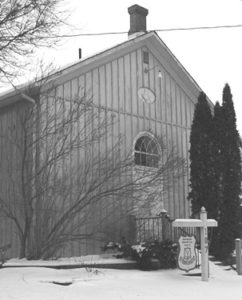 The first home of Union Lodge #118 G.R.C. was in the Village of Lloydtown in King Township, at that time a centre of great activity in this part of the country. Early records from the 1830’s indicate that this community boasted three churches, a tannery, flour mills, several stores, a blacksmith’s shop, a shoe maker’s shop and a large drill hall for the army of those days.

Likely the drill hall in Lloydtown was the site of regular Lodge meetings. From 1859 to 1870 the Lodge remained in Lloydtown, but it was then decided to establish the Lodge in Schomberg, a few miles to the northeast.

The Lodge’s first home in Schomberg was in Mr. Harry Isaac’s Hotel in the central part of the Village on the site where the community Fire Hall was later established. Some years afterwards, the Lodge was able to procure a former church building on Main Street. This building was moved across the street and south to its present location at 107 Main Street. Preparing for the 125th Anniversary of Union Lodge, a major overhaul was accomplished in time for the event in May 1985, mostly by volunteers from the membership. Though not a large building, the Schomberg Masonic Hall is truly an historic structure and a tribute to the Masonic spirit.